Parkrun is a brilliant concept; free 5k runs in local parks.  You need to go to the Parkrun website, join up and print off a personal barcode and then you can just turn up and run.  At the end of the run, you give your barcode to a marshal who gives you a token which is a record of your time and position.  These are then scanned further along the line by another marshal and the results are posted on line later in the day.

I had previously entered the first ever Barrow Parkrun and really enjoyed it so when a new event was set up in Carlisle, I thought I would check it out. 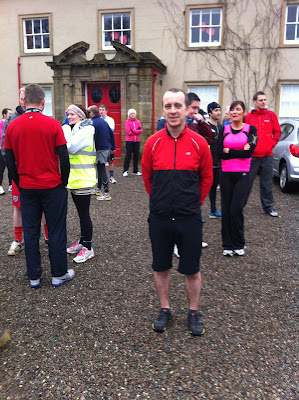 I bullied Jonathan into joining me.  He's usually up for an adventure but I think he wanted a lie in today.


So, after picking Jonathan up at 7.40am, we headed up to Carlisle.  The Carlisle Parkrun is in Chances Park, next to Morton Manor.  This is on the way into Carlisle from the south.  As we had set off pretty early, there was little traffic and, even with stopping a few times for snacks, we arrived at about 8.30am.

Gradually, a few cars started to turn up.  Men and women wearing tights and bright coloured jackets (runners are a funny lot), Jonathan was scoping the opposition, identifying targets (he usually sets his sights pretty low).

There is a reasonable amount of parking at Morton Manor but there are streets all around the park where you could leave your car if you don't get there in time to get a space.

We sat in the car to keep warm, checking in on Facebook and updating our status.  After watching the car park fill up with all variety of runners, we started wandering over to the start line at about ten to nine.

Jonathan got his revenge on me for making him get up early by wearing the same clothes as me.  We both had red jackets, both had black shorts and both had black trainers (with yellow trim).  Luckily I'm much more good looking than him so there is no chance of getting us mixed up (that's me in the top picture). 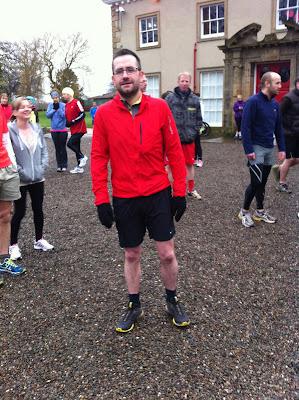 We bumped into one or two people that we knew, had a quick chat and then had a little run along the gravel drive that forms the start and end of the course.

Before long it was time to head off.  I really wasn't sure what my target for the race was.  There are many factors that can affect a time.  My ultimate goal for 5k is to get below 20 minutes.  At the Barrow Parkrun (which is quite hilly) I ran 20.52 but was in better shape than I am at the moment.  I thought that my knee might hold me back a little bit, it's hard to dig in and find power without it hurting and the course, in terms of elevation profile, surface and the amount of bends etc, can all make a difference.

The course is three laps of a mixture of grass and concrete tracks, starting off on gravel.  There are a number of sharp turns in it so it is never going to be a record breaking course.

The first mile felt really hard.  It turns out that it was hard because I was going faster (6.35) but it felt slow at the time.  The grassy parts of the course were a little bit muddy in places.  Overall there was a nice mixture of uphill, mud and downhill.  There are no dramatic inclines or declines like the Barrow event.  The second and third miles were pretty even (6.59 and 6.57).  I had told Jonathan that a perfect race was where you had some energy left and were able to speed up at the end.  I really didn't have any energy left but I heard someone behind sprinting to try to beat me so I put in a sprint and managed to hold him off.

Here are the splits from Garmin Connect:

I felt like I was going to throw up after crossing the line and did a little dry-heave so I took a moment but then got back in line to have my barcode scanned.  Out of the 124 runners who finished, I was 17th with a time of 22.04.  Jonathan came in shortly afterwards in 22nd place with 22.42.  We both decided we were very happy with the results.

Although Jonathan didn't throw up, or dry-heave, like I did (which is a good job considering the Chunky KitKat and coffee he had at the garage before the race), he did proceed to have a bit of a moment in the car.  After coughing his guts up for a good few minutes, he did eventually come back to some sense of normality, muttering something about tasting blood in his mouth and we headed into Carlisle for a coffee.

Back at home, I uploaded the run to Strava, my new favourite toy.  As it was a fast run, several achievements were awarded, including 6th fastest circuit of the Carlisle Parkrun course.  This only means that no more than five of the 16 people who beat me today are signed up to Strava but I'll take it.

Here is the activity on Strava:

I've signed up to the premium version of Strava.  It's not very expensive and it gives you another level of geekdom.

Here are the pace zones for the run: 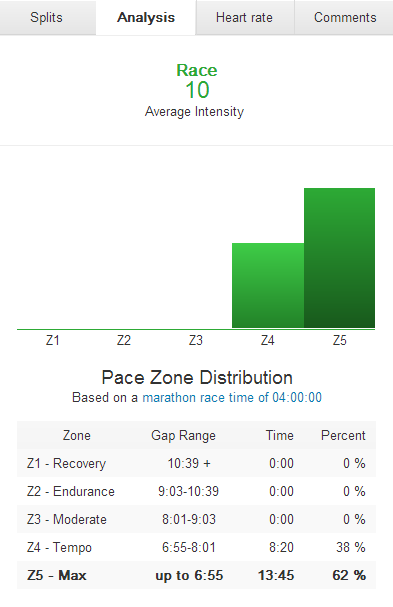 It shows that for the majority of the race I was in the highest zone, with the rest of the race being in the next zone down.  This is what I would expect for a sprint.

Now a look at heart rate zones.  These should correspond to the pace zones unless running faster downhill  with the same effort has an effect: 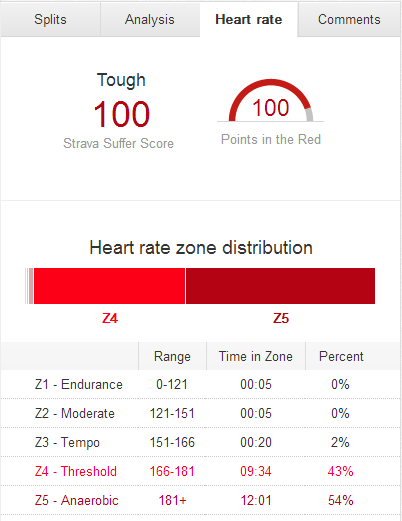 The last thing to note is the Suffer Score with the Points in the Red, both at 100 for my run.  Here's what Strava says about that: 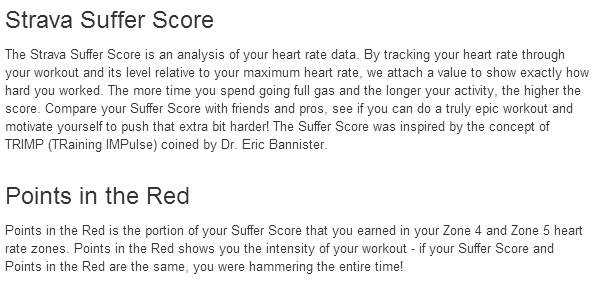 As if I didn't already know!  There are plans to set up a Parkrun in Workington (my local town) so I think some progress on the 5k PR will be made this year.  Watch this space.